“Dined at Mr. Morris’s and drunk Tea there. Went afterwards to the concert at the City Tavern.”

Washington was in Philadelphia for what at the time was called “The Federal Convention,”  and we now call the Constitutional Convention, that led to the creation of the modern American state.  Notwithstanding all of the politics and intrigues, however, Washington still found time to attend a number of events in what was at the time the nation’s cultural center.  And on this particular evening he attended a concert by a newly-arrived and highly-regarded “composer, conductor, pianist, and theatrical manager” named Alexander Reinagle. 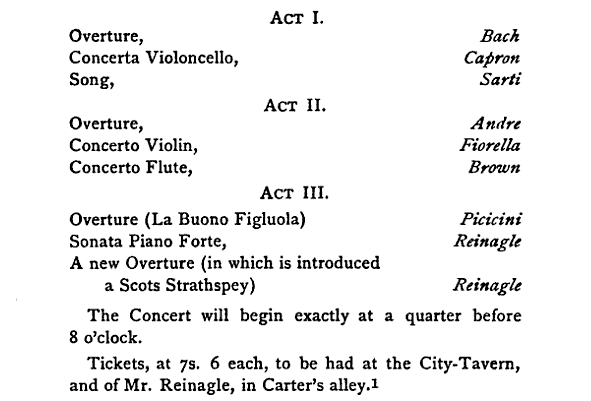 Washington apparently liked what he heard, for it marked the start of a long friendship between the English-born musician and the nation’s first President.  Reinagle was actually born the same year as Mozart (1756), and died the same year as Haydn (1809).  He came to the US in 1786, first living in New York before taking up residence in Philadelphia, then emerging as the young nation’s cultural center. 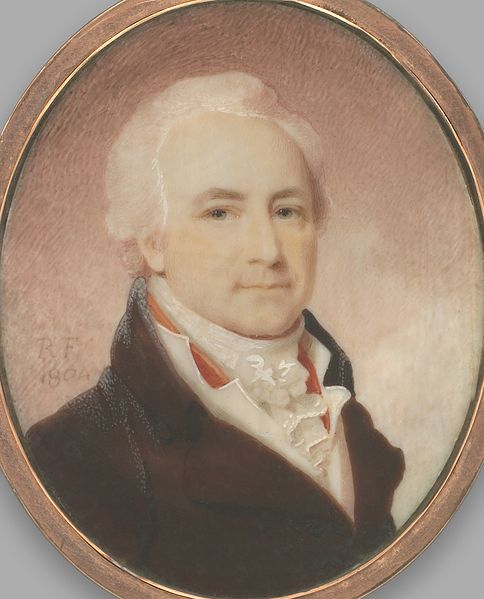 In 1789, during Washington’s journey from Philadelphia to New York for his inauguration as the nation’s first President,  Reinagle supposedly composed a “Chorus”, with the words, “Welcome Mighty Chief, Once More!” which the composer rather puffily, (and some contend, untruthfully) put on the frontspiece,

Chorus Sung Before Gen. Washington as he passed under the Triumphal Arch raised on the bridge at Trenton April 21st 1789.   Set to music and dedicated by permission to Mrs. Washington by A. Reinagle… Philadelphia.

Washington was impressed enough with Reinagle that he hired him to give keyboard lessons to Washington’s step-grandaughter Nellie Custis…and to order a top-of-the-line double-manual harpsichord for their homes in Philadelphia and eventually at Mount Vernon…where it still can be seen today! As for Nellie’s proficiency at the instrument, a great article on the Mount Vernon website has her brother remembering  she had to practice”very long and very unwillingly at the harpsichord. . .the poor girl would play and cry, and cry and play, for long hours, under the immediate eye of her grandmother, a rigid disciplinarian in all things.”  Though apparently not for nought:

Julian Ursyn Niemcewicz, a Polish nobleman who visited Mount Vernon for around two weeks in June of 1798, wrote of Nelly that, “Her sweetness is equal to her beauty, and this being, so perfect of form, possesses all the talents: she plays the harpsichord, sings, draws better than any woman in America or even in Europe.” On the last night of his visit, he wrote sadly, “In the evening, for the last time, pretty Miss Custis sang and played on the harpsichord.”

Several Reinagle compositions survive in the Nellie Custis collection of sheet music at Mount Vernon, and upon  Washington’s death in 1799, he composed a Monody on the Death of George Washington.   And the “First Composer” didn’t stop at Washington, his output also includes the Federal March, President Madison’s March and Mrs. Madison’s Minuet.

Far more substantial and interesting are the four extended keyboard sonatas he composed in the style of his idol C.P.E. Bach, whom Reinagle had known during his travels in Europe.  The so-called “Philadelphia Sonatas” are the only pieces of Reinagle’s that really ever get any hearing at all.  Check out this performance in the WGBH Fraser Performance Studio by Handel & Haydn Society keyboardist Ian Watson.