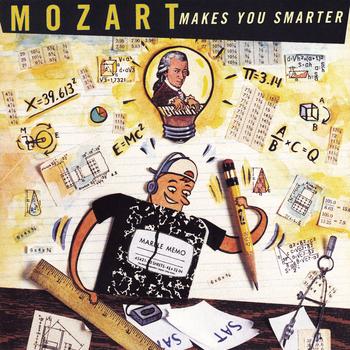 More musings on the subject of two pianos:

During my Performance Today years, we sure devoted a lot of coverage to “The Mozart Effect” — and the flurry of books and recordings that came in its wake. And here in the Age of the InterWebs, I discovered that there’s an entire website from a University of Illinois grad student devoted to “the study of the studies,” e.g., the breathtaking number of academic inquiries to discover if listening to Mozart really did make you smarter.

And the cause of all of this was not the totality of Mozart’s amazing output.  Nor any of a handful of great works, like the late symphonies, or the piano concertos, of operas like Don Giovanni.   No, there was a single, little known, Mozart piece that started this fire.

It began with an article published in Nature in the fall of 1993, authored by University of California-Irvine neurobiologist Gordon Shaw, with researchers Frances Rauscher and Katherine Ky.   They described the nature of their research:

They assigned thirty six Cal-Irvine students to one of three groups, and offered the same “pretest” to each of the students. One group then listened to a selection by Mozart (Sonata in D major for Two Pianos, K. 448). A second group listened to what was called a “relaxation tape,” and the third group was subjected to ten minutes of silence. All of the students were given the same test, which was designed to measure spatial IQ. This test is described as mentally unfolding a piece of paper is that has been folded over several times and then cut. The object is to correctly select the final unfolded paper shape from five examples. The students who listened to the Mozart sonata averaged an 8-9 point increase in their IQ as compared to the average of the students who had listened to the relaxation tape or who had experienced silence. The increase in IQ of the Mozart group was transitory, lasting only about the time it took to take the test– from ten to fifteen minutes.

Hardly conclusive, but it hardly mattered; An author and psychologist named Don Campbell was the one who spun this somewhat spurious research into commercial gold. He went  so far as to trademark the name “Mozart Effect” via his 1993 book called The Mozart Effect: Tapping the Power of Music to Heal the Body, Strengthen the Mind, and Unlock the Creative Spirit.”   In the words of one professor quoted in the Illinois study,

“By trademarking the name “Mozart Effect,” Campbell has even gone cable with infomercials for his book and its accompanying compact discs and cassettes. In the great tradition of P. T. Barnum and the “Veg-O-Matic”, Mozart has now hit the mainstream of American life.”

Campbell may be gone – he passed away at the age of 65 in 2012, but www.themozarteffect.com lives on, twenty years later, both in the halls of academe, where far more thoughtful and nuanced research about the very real effects of music on brain development and healing are taking place.  Not to mention in the commercial marketplace, where Mozart’s brain-enhancing abilities are still touted. Check out this fascinating 20th anniversary discussion on WQXR for a sample of some recent thinking.

Meanwhile, check out this smartly-turned performance by Martha Argerich and one of her young proteges, Gabriele Baldocci, play that (in)famous first movement.   Then go do a crossword puzzle!