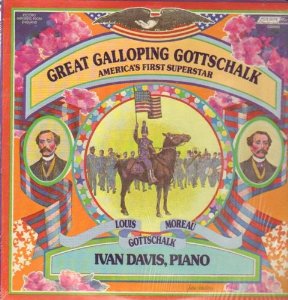 Today’s birthday to celebrate is that of American original Louis Moreau Gottschalk. Check out the nice web piece my WGBH colleague Cathy Fuller put together a couple of years ago, pairing up Gottschalk’s iconic (and, I would say, groundbreaking) 1855 composition The Banjo with Gloucester, Mass., painter Fitz Henry Lane’s New York Harbor,  “composed” during the same year, and now hanging at the Museum of Fine Arts in Boston.   As Cathy puts it,

The year is 1855, and the two artists come from very different circumstances. One of them was forced to stay in one place all his life; the other was famous for globetrotting.The painter Fitz Henry Lane (1804-1865) lost the use of his legs before his second birthday. The paralysis was thought to have come from ingesting poisonous jimsonweed. He would never recover.The musician Louis Moreau Gottschalk (1829-1869) became America’s first traveling virtuoso – a pianist/composer who did an unbelievable amount of touring. He gave uncountable concerts in Europe, Central America, South America and Cuba. Sometimes called the “Chopin of the Creoles,” he worked into his music the syncopations of Louisiana and the Caribbean, creating pieces that anticipated jazz and ragtime. His music really had little to do with Chopin’s, but his spectacular control of the instrument was caricaturized by images of a wild pianist with hundreds of flying fingers.

Actually, there IS a pretty significant connection between Chopin and Gottschalk, as we discovered in one of our Radio Chopin episodes called “Chopin Comes to America.”   Sample grab:

When Gottschalk was 13, his father packed the young piano prodigy off to Paris to study at the world-famous Conservatoire which at first REJECTED his application, his examiner declaring, “America is a country of steam engines.”

But Gottschalk chugged through and by 1845, he was making his Paris debut at the Salle Pleyel. On the program: Chopin’s Piano Concerto in E minor. In the audience: the composer himself.

Chopin met Gottschalk after the concert, and heaped praise on the young American, predicting a brilliant future for the teenaged pianist. Hector Berlioz was there too, and spoke of Gottschalk’s “exquisite grace, brilliant originality, and thundering energy.”

As for his signature piece, it’s amazing what a wide range of interpretation it gets, and if YouTube is any indication, how much it represents “America” to foreign audiences as much as any work by Copland, Gershwin, or Bernstein. I first discovered Gottschalk through the mid-70s by pianist Ivan Davis, a few of which you can find on YouTube.  Later, in DC, I was blown away by the sound and incredibly solid playing by pianist Lambert Orkis, who recorded a lot of Gottschalk on the composer’s instrument of choice: a 9-foot Chickering, made right here in the Hub of the Universe.

As for recordings of more recent vintage…. I usually admire the unusual repertory – and performances by the eccentric Cypriot pianist Cyprien Katsaris.  But he seems to take the “Serenade Grotesque” subtitle a little too much to heart, dropping and adding notes as he pleases while he buzzes through it like he’s on a bullet train to Bejing.  Irish pianist Philip Martin, on the other hand, gives it an almost ponderous opening at this performance in Mexico City.  And then there is this highly nuanced (and nicely shot) performance by Dutch pianist Regina Albrink.  I’d never heard her playing before but i’ll be listening for more after hearing this!